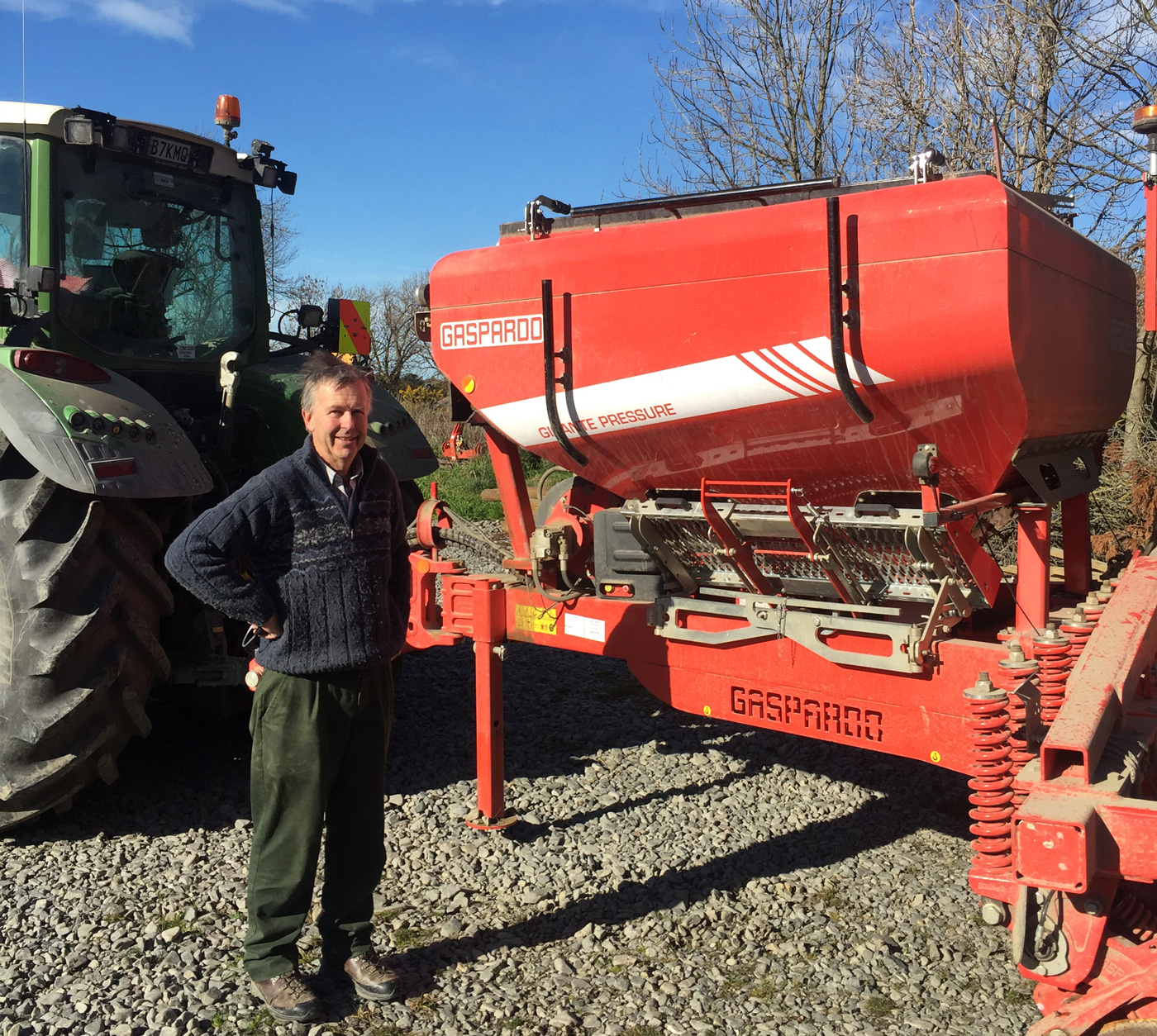 Driven by an intention to do better for himself and the environment, James Halford of Methven, needed a direct drill. He bought a Gaspardo Gigante from Power Farming. It has already proved to be a vital tool in his new venture.

"My main drive is to do something to reduce my carbon footprint,’ he said.  “But I not only want to reduce it, but eventually to sequester carbon, and enjoy doing it.”

James has farmed his 193 hectare, alluvial silt-loam arable farm, since 1997, but recently he realised he was on a plateau. His soils were flat. By continually doing more of the same, nothing was going to change.

Following some research he sought information and guidance from Jono Frew of Natural Performance LTD. Jono was fully supportive of his choice of the Gaspardo Gigante as the direct drill to kick start his regenerative arable operation.

Jono said, “It’s really a beautiful machine, well built, and nice and simple to use.”

Power Farming brought the Gaspardo Gigante into New Zealand in 2002. Over time it has been developed to perform particularly well in New Zealand’s conditions. It was chosen as a fit for James’s new venture largely because of its reputation to handle the heavy stuff.

Designers from Maschio/Gaspardo have visited farms around the Taupo/Rotorua region and listened to users on the requirements of a direct drill in New Zealand. In response the Gigante is robust in the extreme.

Features such as the low position of the duel hopper have emerged out of need for a low centre of gravity on the hills and easy loading, wherever it might be. The standard European configuration of 7in/17.8cm has been reduced to 6in/15.2cm, specifically to meet NZ’s demands. Discs and coulters have been strengthened to meet New Zealand’s hard ground.

The Gigante is ISOBUS controlled and James uses it via his tractors screen. The fault detection feature is reasonably self-explanatory. Although depth control can be easily adjusted individually, James uses the factory settings. With a multitude of seed sizes he finds it best to stick with the standard setting for the time being.

The 280° steering drawbar allows the drill to turn on a sixpence and it folds easily to a 3m transport width.

“My goal is to improve the health of the soil, which will in turn improve the health of the plants. Hopefully, and according to everything I've read and learned, strong plants suffer from less disease. Less disease, less pests as healthy plants are not as attractive to bugs. Ultimately I hope to use less chemicals and eventually less synthetic fertiliser, and so less input all round for a better environment.

“Presently, I am planting into unmoved ground, though the drill works equally well in cultivated land. Grass seed is planted directly into wheat stubble, after the straw has been removed. I may do it differently in the future and leave the stubble almost full length and drill into that. I feel confident the drill will cope. I suspect that by leaving the stubble, and direct drilling into it, we may achieve even better results than they are achieving in Australia, where moisture retention is a major concern.”

It seems the Gaspardo Gigante is vital to James’s operation and is aligned to the principles of regenerative agriculture, of minimal disturbance of the soil, whilst regular sowing of cover crops are the key to improving overall performance.

Having owned the drill for less than a year James is already seeing improvements. It has been used to sow his usual crops of cereals, autumn sown brassicas and grass crops, spring linseed and peas, as well as multi species cover crops. The Gigante’s dual hopper has been used to simultaneously drill barley and legumes, with the legumes being left behind at harvest to maintain biodiversity and improve the soil biology.

“It is very early days, but the soil does appear to have a better feel and smell, particularly when compared with the one field that I didn't direct drill. There is more life and the colour has improved. The field left from direct drilling has a very different feel. It had been in potatoes and that soil has just slumped. It has had the crap cultivated out of it and would blow away in the wind as it has no structure. I'm starting from Ground Zero with that paddock.” James is no longer leasing ground for potato growing as it goes against the principles of non-disturbance of the soil.

“The biggest single change to how I farm, is how I look at things,” James concluded.

“Much of what we're doing now is what our grandparents were doing years ago.  We have been drawn-in to using more and more input in the way of machinery and synthetic fertilisers to fix our problems.  I believe that our grandparent’s profitability was probably better than ours today. Now, with regenerative agriculture practices we have the potential to change that.”

Power Farming, Morrinsville, recently hosted Jono Frew of Natural Performance NZ and Peter Barrett of Linnburn Station, on their successful RA20 Roadshow. Interested farmers from all sectors were enlightened on the science and principles behind Regenerative Agriculture.

Jono Frew can be contacted via email; naturalperformance.co.nz

Peter Barrett can be contacted via email; peter@linnburnstation.co.nz

To enquire about the Gaspardo Gigante Direct Drill contact your local Power Farming dealer or visit their website www.powerfarming.co.nz